“Gifts that Humble Us” by Garris Elkins

In the late 1990’s, Jan and I lived in Berlin, Germany.  Berlin was our base of operation because of the
abundance of travel options the city provided. We worked and traveled in the
nations that comprised the old East European Communist Bloc.

Our primary assignment was to encourage and
strengthen our family of churches in that region and to explore new
relationships. For our four years in
Europe we lived on airplanes and trains. Our travel took us to some beautiful places, but the most beautiful part
of our assignment were the people we met along the way.

We were contacted to travel to Budapest, Hungary to meet
with a group of people who were voicing an interest in relating to our church
family. Upon our arrival in Hungary we
met this group and spent the next several days building relationships and
teaching. One young woman attended every meeting. She was articulate and well educated.

On our last evening in Budapest the young woman brought us a
gift. The gift was a beautiful glass bowl. As we unwrapped the gift she began
to explain the story of the bowl and how it ended up in her grand parents
possession. 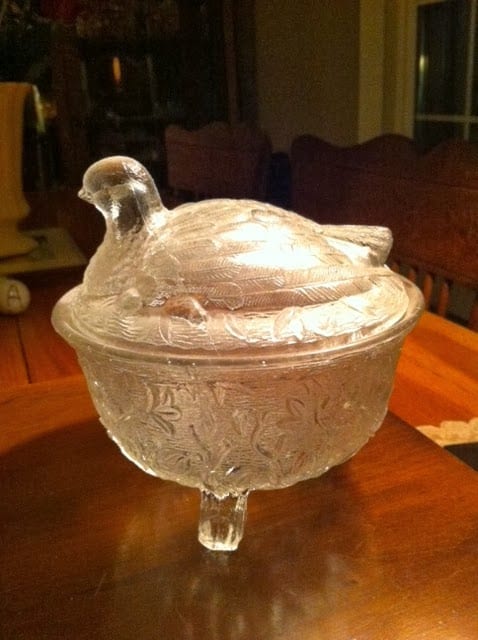 She shared that her family had fled to Hungary from Nazi
Germany during World War II. In their
overland escape they were only able to bring with them what they could carry
during their overland hike to freedom. Among the articles they carried was this beautiful glass, serving
bowl. The bowl was constructed in two
parts with the head of the bird functioning as the handle.

We were all taken with such a story – a story much like a Hollywood
movie script. She said her grandparents were so thankful that I had come to
Hungary to share God’s love that they wanted to give me this gift as their
appreciation for our visit.

I had been in similar situations before where gifts were given
by grateful people, but this gift carried with it a significance I had never
experienced before in all my travels.

I thought of this gift being carefully wrapped, treasured
and carried over the many miles of a dangerous foot passage. I thought of what this bowl meant to her
family as part of their heritage. Of all
the things they could bring with them – they chose this beautiful bowl. And now they wanted to give it to me.

In the moments between her telling me the story of this
prized possession and my unwrapping it, I had to make a decision. If I received this gift I would have to carry
it and prize it for the rest of my life. If I declined the gift I would demean an unparalleled act of sacrificial
giving. In great respect, I received the
gift. Today, 15 years later, that bowl sits
in a place of honor in our home.

Over the years, I have tried to think of what God was saying
to me through the gift of the glass bowl. I was obviously honored to receive such a gift, but the greatest thing
that happened to me was the humbling effect the gift brought. I am not sure I would have given such a gift. I would have been afraid I was giving away
irreplaceable family memories.

Then I realized I do carry a priceless gift – I carry the
presence of Jesus Christ. Every believer
does. Each time I love another person in His name or share His truth, I am
giving away something priceless. I am
giving away God. This gift of God’s love is priceless because it cannot be
purchased with human currency or effort. It must simply be received and released. The greatest value of a gift is expressed by giving it away.

Each time we love in His name we are giving a gift that will
leave the recipient feeling humbled because they are holding something beyond human value.

Tonight, I held again that glass bowl. I held it with the gentleness and respect due
its history because I know it survived a dangerous trek to ultimately end up in
my hands. That bowl, like our lives, is
on assignment to show others what real love looks like.

← “Drinking Scorpions” by Garris Elkins “Transition Thoughts” by Garris Elkins →
Thanks for subscribing! Please, ignore the email prompting you to login and create a password.
We use cookies to ensure that we give you the best experience on our website. If you continue to use this site we will assume that you are happy with it.AcceptPrivacy Policy