#18 Lessons Learned From A Dry Lake

#18 Lessons Learned
From A Dry Lake

This week, I
learned that one of our local lakes was drying up.  Emigrant Lake is located on the outskirts of
Ashland, Oregon.  It was first created in
1924 and then expanded to its current size in 1960 to service the growing
agricultural industry in the Rogue Valley. When the lake was finally filled it
covered a rich history not known to many.

At the time the dam
was built a historic crossroads – Klamath Junction – would be covered by the
increasing water level.  Klamath Junction
sat at the intersection of the Green Springs Highway and Old Highway 99.  It was at this junction that travelers could
gas up and refresh themselves before and after crossing the Siskiyou Mountains.  My parents would have traveled this now
submerged roadway in the 1930’s and 40’s as they traveled up and down the west
coast. In 1846 my relatives, who were part of the first Applegate Wagon Train
into Oregon, would travel by ox cart across this very junction into the Rogue
Valley where I now live.  In 1846 there
was no visible roadway only a barely discernible trail used by the early Hudson
Bay trappers.  Before the coming of these
early Mountain Men, for millennia, First Nations people stopped at this
junction to trade and communicate.  This
was a place of cultural significance.

The last time
Emigrant Lake dried up was in 1994.  This
offered me a rare opportunity to go and explore the dry lakebed.  When I parked my truck, I began to walk down
the crumbing asphalt remnant of the “Old Road” as my father would call these old
abandoned ribbons of asphalt that still parallel many of our modern highways.

My main purpose as
I descended the dry lakebed was to pray.
I wanted to pray at the exposed trail source that brought so much history
into our valley.  I could see the old
foundations still visible that once supported the few buildings that were the
old Klamath Junction community.  Tires
from 1920 era cars sat atop the mud along with old sparkplugs and other car parts.  As I continued to explore the lake bottom I
came across a fishing lure sitting all by itself atop the sand. 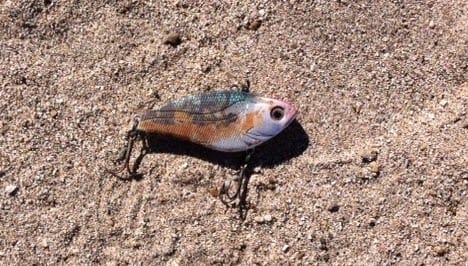 By instinct, I
reached down to pick it up and as I held it in my hand the Lord spoke to me and
said, “Fish follow the water”.
Immediately, I knew what the Lord was saying.  As I held the fishing lure in my hand and
listened to the Lord’s words, I saw in the distance the last bit of water that
remained of Emigrant Lake.  It was only
about an acre in size.  If I was going to
fish and hope to catch anything, it would be there.

I put the lure back
on the sand and continued walking.  God
was processing a word for me, and a word for the larger Church.  Things have changed.  The core elements of our faith remain secure
and intact, but the cultural application of our faith needs to be revisited or
our lure will find itself sitting alone atop the dry sands of a changing culture.  The people waiting to receive their
God-destiny from the message we carry are swimming in different waters than
they used to be.  If we are going to
catch these lives and become the fishers of men Jesus talked about, we can no
longer fish in dry cultural lakebeds and expect to catch anything.   We need to pick our lures up off the dry
sand of old and expired methods and cast them into the fish-rich waters of our culture
because fish follow the water.

← #17 The Breakthrough Of Blessing #19 Trusting Your Team →
We use cookies to ensure that we give you the best experience on our website. If you continue to use this site we will assume that you are happy with it.AcceptPrivacy Policy