The Fruitfulness of Your Future 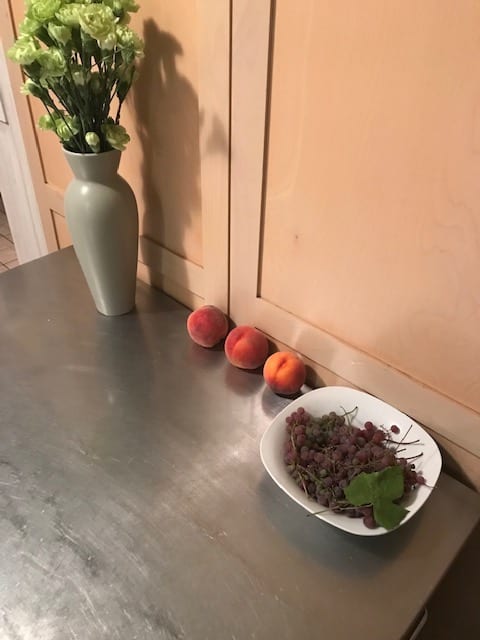 Atop our kitchen counter, I saw fruit marking the end of one season and the beginning of something new. The peaches in the photo were the last in the final harvest from our favorite orchardist. We grew the grapes in our backyard. The peaches were harvested at the end of summer. The grapes mark the beginning of the fall grape harvest when new wine is produced. Each fruit matured in a different season.

When I passed by our kitchen counter and saw the fruit, the Lord spoke to me about the time of transition between seasons. The Lord said, “Eat the fruit in its season.”  It was a short message with a longer interpretation.

Every season and each assignment from God will bear a unique fruitfulness within an appointed season. We don’t have to be like the Israelites in the wilderness who, out of a fear of lack, gathered too much manna and it spoiled. Their fear revealed their lack of trust in God regarding their future provision. God’s fruit appears and matures under His timetable. There is no need to ever hold on to the fruit of a previous season. God will always bear new fruit on faithful branches.

Eat the goodness of this season. It has an expiration date, not because it will spoil like the manna. It expires because more fruitfulness is planned for the new season you are about to enter. God delights in revealing the sweet fruit He has planned for your future. Do not allow a fear of lack to influence what you hold or release. This is a time to believe that the branches of your future will hang heavy under the weight of the fruit God plans to reveal. Eat the fruit of this season with joy and live in expectancy of what is to come.

← Mystery and Wonder Engaging Multiple Targets in Prayer →
We use cookies to ensure that we give you the best experience on our website. If you continue to use this site we will assume that you are happy with it.AcceptPrivacy Policy