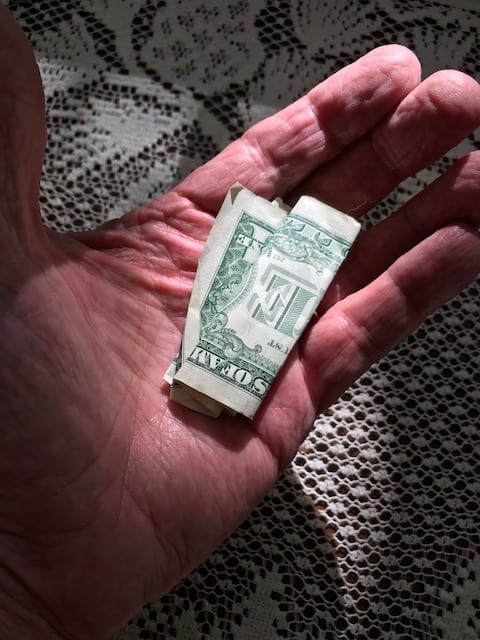 Last weekend, Jan and I were ministering at Won by One Church in Oregon City, Oregon. It was a wonderful weekend. We spent time with the leadership team in several different settings and then we spoke during their Sunday morning worship service. Just before the service began a son of one of the men on the pastoral team came up to me. He is a grade school age boy.  He greeted me and pulled out a crumbled one-dollar bill from his pocket and presented it to me. I asked, “What’s this?” He said, “It’s for you.” I put my arm around the boy and thanked him for his gift. A dollar means a lot to a kid. As I received the boy’s gift, I was actually receiving it for a greater purpose. I didn’t need a dollar. I needed what the dollar represented.

The parents of this young man had taught him something many older men have yet to learn. The boy was giving beyond himself. His brothers were just like him. All weekend long they were hanging around me and each day they greeted me with smiles. Their young lives were already marked by honor.

Years ago, I remember Jack Hayford telling a group of us about a $100.00 bill someone gave to him. He knew that $100.00 had another assignment rather than just spending it on himself. He gave it away. In a few weeks, another person gave him another $100.00 bill. He gave that one away. This back and forth receiving-giving went on for the longest time. Jack said he could never give the $100.00 bill away no matter how hard he tried. It just kept coming back to him.

The same is true for the $1.00 bill the boy gave to me. I am going to try and give it away because it really doesn’t belong to me. It belongs to honor. The young boy honored me last Sunday and I want to partner with the continued release of his kind gesture. A single dollar doesn’t sound like much to a natural mind, but there is a unique value attached to a dollar given in honor that I want to see released into a world that many times only takes, but never gives.

The best sermon preached last Sunday was a sermon on giving by a grade school preacher just before the adults did their thing. God will use that young man in profound ways because the Lord has already captured his heart.

← God's Pairing The Top Line →
We use cookies to ensure that we give you the best experience on our website. If you continue to use this site we will assume that you are happy with it.AcceptPrivacy Policy